I have more than twenty-five years of experience in the investment industry. I spent my career managing investments for individuals and institutions. At the age of 51, I retired. I was able to do it because I'm a saver.

What You Should Do When the Stock Market Swoons

The trouble is if you missed just the months with the top 5 percent of returns in the market since 1950, you would have cut your returns almost in half. Of course, if you were able to avoid the bottom 5 percent of months in the process, you would perform just about as well as the market. But given the uncertainty of when those occur, that doesn’t seem like a good trade-off.

To illustrate, take a look at what happened during and after the financial crisis. The following chart shows the total return for the S&P 500 and cash flows in (bars going up) and out (bars going down) of equity mutual funds during the crisis and through the recovery to 2012. 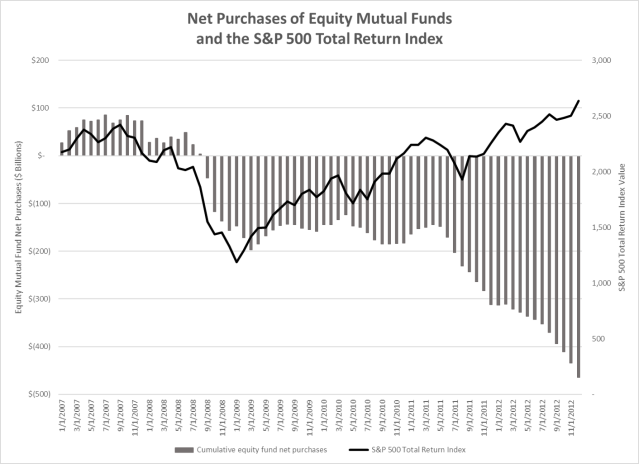 The peak in value for the S&P 500 prior to the crisis came in September of 2007. From there the stock market began a gradual decline, with some investors selling sporadically. However, in September of 2008, the floodgates opened, and mutual fund investors began pouring out of equity funds. The S&P 500 had already lost more than 36 percent of its value.

The bottom of the market came in February of 2009, just four months and 16 percent later. But money kept leaving the stock markets. Even as the stock market crested its prior peak, equity funds saw growing withdrawals through the end of 2012.

But be realistic. You only have perfect hindsight. You know nothing about the future. You can’t tell whether the market is at a peak or just a nice viewpoint along the way. And you certainly can’t tell when the market has hit bottom.

The biggest monthly net sale of equity funds was in October of 2008, and the biggest monthly net buy following that was January of 2013. If you had sold and bought back in those months, as many other market participants did, your return for the ten years ending in September 2017 would have been just 10 percent, or about 1 percent per year.

What if you had done nothing? If you had not touched your stock market investments, in the following ten years your money would have more than doubled for an annualized return of 7.3 percent. Doing nothing is certainly easier than picking both the top and bottom of the stock market. Steadily adding to your investments, as you would in your retirement account, would have been even better.

Timing the market is a fool’s game. Seeing your nest egg shrink is no fun for anyone, but if you don’t have to spend your money right away, it can recover. So, as the market is adjusting, your task is simply to do nothing.

Photo by Chris Liverani on Unsplash

This site uses Akismet to reduce spam. Learn how your comment data is processed.