I have more than twenty-five years of experience in the investment industry. I spent my career managing investments for individuals and institutions. At the age of 51, I retired. I was able to do it because I'm a saver.

I have always voted as a democrat. I consider myself a left leaning moderate, but the political party quiz put together by Pew Research has me as a very liberal democrat. Take the quiz, and see where you wind up. One of the reasons I appear to be so left wing is that all of the questions reflect social values which seem to be the focus of the current Presidential race. There are no questions regarding tax policy, the public debt or other important financial issues. It is in these areas where I disagree with the democratic party.

Recently, in an Op-Ed piece in the New York Times, Elizabeth Warren made the case for increasing corporate taxes as a percent of total tax revenue. This was in response to the European Union’s finding that Ireland’s tax deal with Apple was illegal. This is a rare bit of commentary when solutions to our financial problems are really not being debated. For example there is little on the table that would lower the corporate tax rate, and that is what is needed. If we want to create and keep more jobs here at home, we need to avoid creating incentives for companies to grow their businesses overseas. Our current corporate tax policy is pushing all businesses, who can, to prefer to grow elsewhere.

According to the Tax Foundation, a leading independent tax policy research organization, the United States has the third highest general marginal corporate tax rate of anyone in the world. Anyone. At 39 percent (including average state taxes), our tax rate is lower only than Chad’s and the United Arab Emirates. We have the highest tax rate among the countries of the Organization for Economic Cooperation and Development (OECD) and our rate is 16 percent higher than the world wide average of 22.9%. In a world where workers and services can be provided globally from just about anywhere, what rational business leader could justify not sheltering what profits she could in a lower tax country, especially when it could be pretty much any other country? The following chart compares our tax rate with that of the OECD. 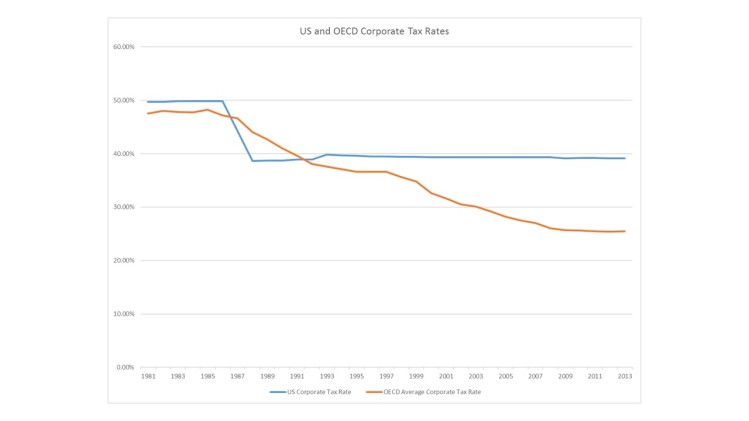 Warren’s Op-Ed pines for the 1950’s when corporate taxes were a third of government revenue. In the fifties, our corporate marginal tax rate was 52 percent. We were just coming off of World War II, and global trade had not yet recovered. The corporate tax rate of other countries was similar to our own. Even if locating a business in another country were feasible at the time, it wasn’t compelling given that there was no tax advantage. Things are very different today. Particularly for technology and finance companies, it is easy to locate businesses in other countries, and the tax advantage of doing so is huge.

Bloomberg News estimates that US companies are holding $2.1 trillion overseas. The top seven companies would owe $90 billion in US Taxes if that cash were repatriated. That would be a big boost to tax revenues. Would you think companies would be more likely to bring that money home if we increased corporate tax rates or if we lowered them? If we were to lower our corporate taxes to the OECD average of 25 percent, and these seven companies brought their profits home, the tax revenue would still be $58 billion. Which is better, $58 billion or nothing?

There has been little talk of dealing with our budgetary issues in the current political campaign. Among other concerns, we’re going to need to dedicate effort to reforming our tax code in a way that encourages businesses to stay here in the US, and that doesn’t include higher corporate tax rates.

We live in a global economy, and as long as our corporate tax rates are higher than competing countries, we are going to find it difficult to get US companies to invest here at home. Of course we do not want to engage in a race to the bottom for tax rates, and that means engaging with other countries to coordinate corporate tax policy where possible. That is a tall order in a world where few are even discussing the problem.

Image courtesy of cooldesign at FreeDigitalPhotos.net

This site uses Akismet to reduce spam. Learn how your comment data is processed.